Kavango has entered an agreement to acquire a 100% interest in Kanye and the licences it holds, up from 50%.

What is the Kalahari Copper Belt’s potential?

It has become focal point for the discovery of what are known as “sedimentary copper deposits”. These are particularly attractive because they can form orebodies that compete with copper porphyry deposits on tonnage but are usually of a much higher grade.

The KCB is currently one of the only sedimentary copper belts globally with an accelerating discovery rate and the potential for both open-pit and underground mineable resource styles1. Yet parts of it remain relatively underexplored due to thick sand cover that requires advanced exploration techniques.

Kavango has secured a large underexplored KCB land package that sits near large projects being developed by companies like Cupric Canyon, MOD Resources, and Sandfire. Our goal is to make multiple significant copper/silver discoveries across these priority targets, and our confidence is based on the quality of our work, which has highlighted their favourable geology, structural setting, and position relative to known KCB deposits.

Using modern technology and surveying techniques that can overcome historical barriers to exploration, we are assessing this package’s potential systematically for the first time, with a particular focus on lengthy “redox boundaries”.

The redox boundaries were formed several hundred million years ago in active sedimentary basins flooded by shallow seas. Organic matter accumulating on the sea floor created anoxic conditions, which formed a chemical barrier to metal ions rising upwards through the sediments as the basin subsided. The change in chemistry caused the precipitation of metal species (carbonates, sulphides etc.) including copper and silver on or just below the redox boundary.

Subsequent tectonic activity folded the sedimentary layers, which was often accompanied by the concentration of metals into fold hinges and shear zones. Fold hinges pointing upwards are known as anticlines, while the downward pointing hinges are called synclines.

Several large copper-silver ore deposits have been discovered within the KCB in association with anticlines in areas now held under licence by Sandfire Resources and Cupric Canyon. These deposits are relatively close to surface and many are amenable to open-pit mining operations.

Accumulations of metals can be traced along the strike of geochemical redox boundaries (sometimes for many kilometres) because they often contain iron and have a higher magnetic signature than the surrounding rock. These areas have recently been successfully mapped by Kavango's exploration teams.

How is Kavango Resources positioned within the Kalahari Copper Belt?

Kanye Resources owns ten prospecting licences in the KCB covering 4,257km2. Kavango has an agreement to acquire a 100% working interest in Kanye (from 50% today) with Power Metal Resources. Terms of the acquisition, which is subject to the issue of a prospectus by Kavango, are provided here.

We also hold a 90% interest in and operate two additional KCB licences covering 809km2 of prospective ground through our JV with LVR GeoExplorers. 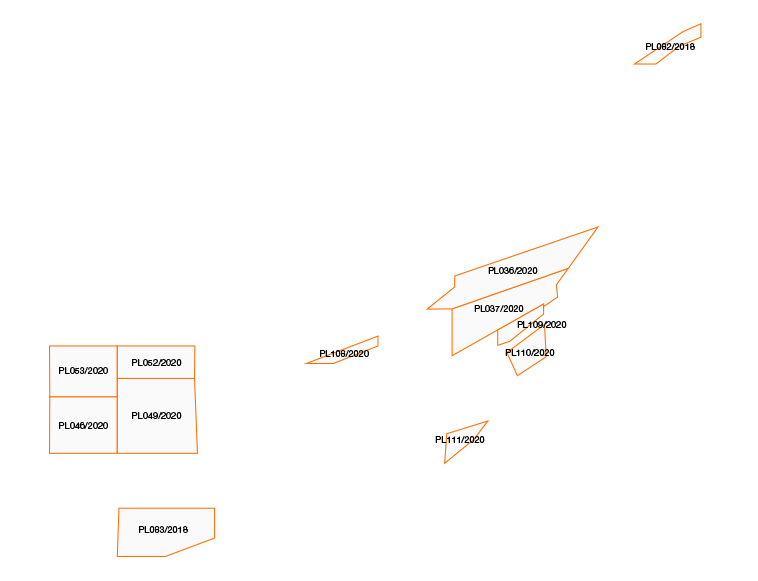 What work has Kavango completed at its projects on the Kalahari Copper Belt so far?

We have carefully designed a methodology for generating and ranking targets across our KCB licences, centred on combining multiple data sets. This approach brings together the combined geological, geochemical, and geophysical experience of our four senior technical team members, and includes:

Our work has led us to define and rank 13 priority targets across the four licences, which include soil sample values of up to 119 parts per million copper (pXRF values). Because the priority targets are still being refined, it should be noted that the ranking of each may change as further data becomes available.

As it stands, we have identified a total of 188 drill collar locations over the priority targets for a total of up to 37,600m of test drilling. We plan to use the results from our initial drilling to inform deeper drilling and, potentially in the future, resource drilling. We expect to add additional targets over time to our inventory, as we continue with further field exploration across our entire KCB licence package.

Details of the priority targets can be found in the table below, and they can be seen visually in the maps below:

Scoping for reverse circulation and diamond drilling programme in the KCB 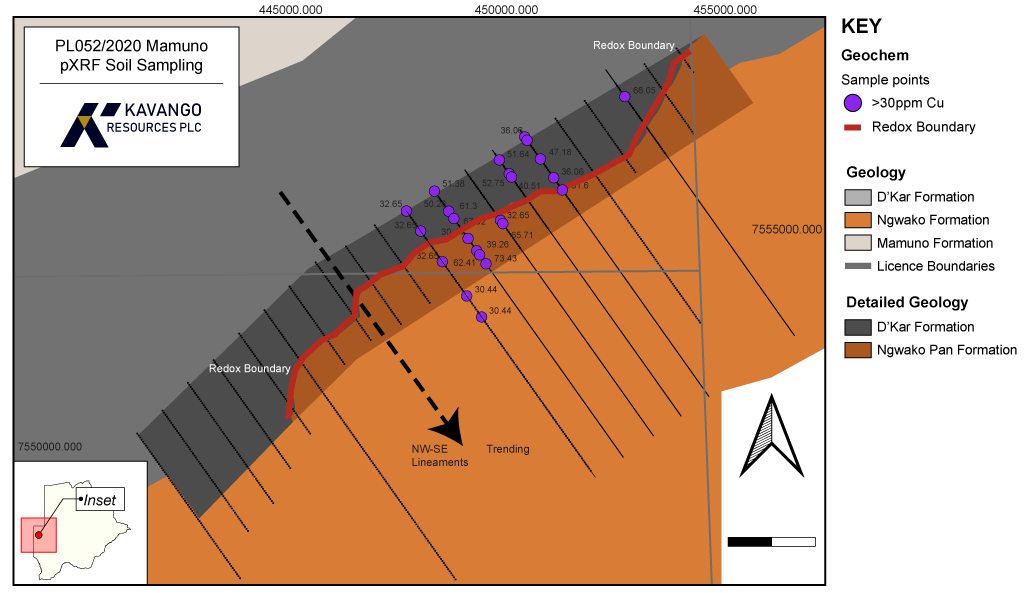 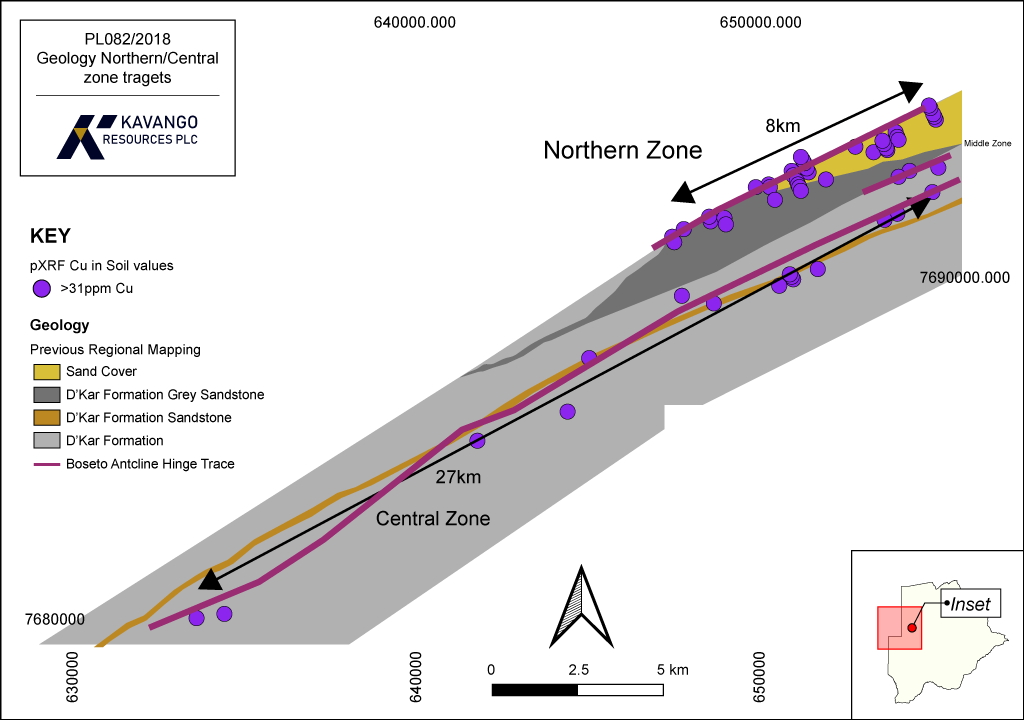 In September 2022, Kavango signed a contract with Mindea Exploration and Drilling Services for an initial pilot drilling programme of 1,250m of RC drilling on PL082/2018. We anticipate that this will focus on the Northern and Central Zones.

Our technical team believes that PL082/2018 is a possible analogue to Khoemacau’s Banana Zone deposit. The Banana Zone deposit sits immediately to the south of Ghanzi Ridge, and has been reported as having an estimated total mineral resource of 55.8Mt @ 1.1% Cu and 16.4g/t Ag.